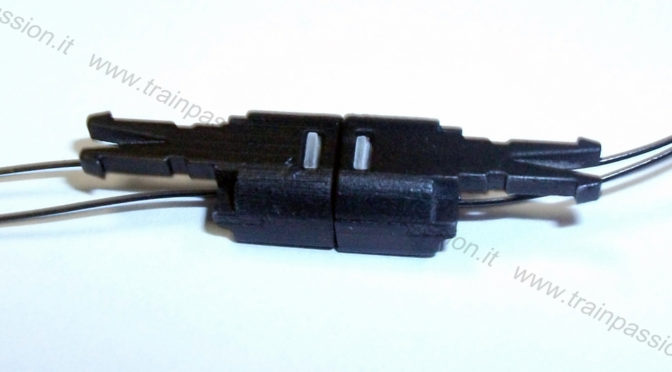 The rolling stock electricity collection is a long-standing problem that afflicts all modellers, forced to carry out tiring maintenance operations on the rails and train wheels. More in detail, the dirt accumulating on them is due to dust oxidation caused by microscopic electrical arcs originating between wheels and rails when the grip is lost. The problem is exponential, as poor rolling stocks maintenance increases oxidation both on wheels and rails.

We thought that increasing the number of conductor wheels, perhaps also using those of carriages and / or wagons, could reduce oxidation.

Making an electrical passerby with couplers provided with commercial contacts provided couplers means greatly complicating trains formation. Furthermore, the couplers we have tested seem to be quite fragile and coupling is really difficult.

Hence the idea of creating a magnetic coupling in which the same magnets act as electrical contact. We designed the object and had it printed in high definition resin.

With some modification the coupler seems to work fine. It is equipped with a standard NEM 362 joint, two cylindrical neodymium magnets to which wires are connected; the magnets are kept inside a mobile bush to facilitate its operation. Finally, a stabilizer bar engages in the corresponding slot.

Its size is small, as you can see from the image below it is no more intrusive than market production ones.

Our magnetic couplers also allow a very realistic distance between carriages. Here they were installed on Ale803 BigModels units.

Their operation on curves is also excellent, tested here with the R1 (365.5 mm) curved track. As far as traction reliability is concerned, we have successfully tested 10 carriages convoys on 500 mm radius helical.

After installing them on all our passenger trains carriages and engines, as on the freight trains first wagon, we immediately noticed the system efficiency , ease of coupling and uncoupling (watch the video), minimum speed ensured starting, no engine lights flickering, as well as interior lights always operating. After a long testing period, we can say that rails cleaning is a residual duty to do if models remains stationary for a long time..

Below a test video showing an engine running along an adhesive tape insulated track.

Surfing the web we found a positive german review. As far as we know, our project has found much more success abroad than at home