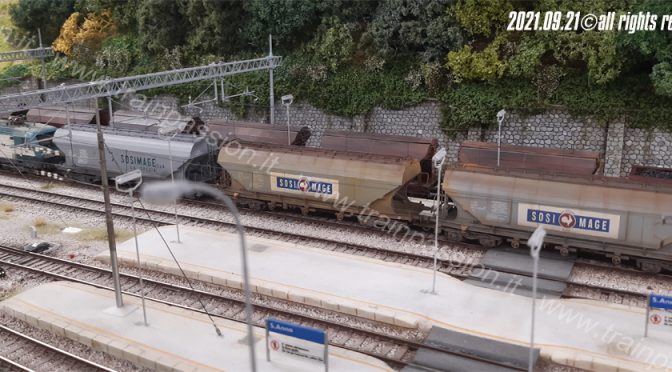 Trying faithfully reproduce reality in a railway model, we cannot leave behind the rolling stocks. Beautiful when taken out of their boxes, with precise and sometimes gaudy colors (especially in epoch VI), perhaps too much to seem real. Hence the decision, postponed for some time, partly out of laziness and partly out of fear of ruining the expensive models, to make them more credible.

Weathering tecniques are numberless, essentially coming from military dioramas modelers. Looking carefully at their examples, our instinctive reaction is to bow the head and give up.

But we do not give up on the first difficulties even if, to be honest, we have never seriously ventured into this activity. After looking at photos and videos of talented “masters”, we took a deep breath and started the long and tiring adventure. If you are also thinking about the famous graffiti “decorating” Italian rolling stock, you are out of line. In our mind these are part of a parallel warped reality.

Our survey has allowed us to understand some basic points: primarily about materials and techniques to use, then the importance to look closely at the details that are being made (With a magnifier). We have found the right materials, such as pigments, AmmoMig specific oil colors and, above all, the airbrush. We obviously didn’t get off to a flying start with the weathering of the first model, but rather used an old poor quality wagon for tests. In order not to offend your sensibilities, we avoid showing the images of it.
We have 12 convoys which, in a more or less decisive manner, will have to undergo the weathering intervention. We will not propose them all here; according to our standards we will split the topic into increasing levels of aging instead.

It refers to renewed rolling stocks and commissioned for some time or passengers coaches. These include the former D213, now held by a private company and used for railways renovating.

A light intervention, as we have opacified the black frame and darkened the model car body with dark brown pigment applied with a sponge, slightly soiled the lower part of the tank and highlighted riveting and moldings with diluted oil paints.

This is the level referred to freight wagons and locomotives;

Let’s focus the image above: The wagons are identical while different is the current body status, as we have major oxidation on the one on the right. In fact, making the wagons different from each other helps getting close to reality, as there is no freight train with identical wagons, even if of the same series.
Down in the detail we initially used an airbrush, darkening the upper and lower body of the wagons; in the one on the right, to emulate a major paint decay, we apply an oxide-colored pigment layer with a make-up sponge, while in the one on the right some rust spots appear. In both we then outlined some vertical oxidation lines with rust oil colors, while with dark oil colors we reproduced the grease residues in some areas.

The operation was performed on all ten wagons, while four have undergone just a slight darkening of the bodies, the frame and the roof. The locomotive has also been slightly weathered.
The convoy is now varied and credible, with some newer wagons and others decidedly worn by time.

The level intended for old locomotives but still at freight trains service in the epoch we refer. We have currently worked on an E656 in old ’80s livery.

Here the weathering is massive: we inspired to more than one real locomotive photo, mixing various “signs of aging”and creating an end-of-life locomotive to all intents and purposes.

Locomotives weathering, unlike wagons, requires the car-bodies and pantographs removal (if any). We use the same materials and tools as previously mentioned, more a very fine point pencil to highlight frames.
In detail, we first airbrushed the roof with a coat of gray / dark brown acrylic; always with airbrush and gray / sand acrylic we have therefore dirtied the lower body part. With rust oil color we simulated the roof and cabins corrosion in some points, with dark gray oil color the grease stains at the pantographs and couplers, as well as the common dirt at the air vents.

Oil colors weathering is performed with very fine lines and / or dots, blurred with thinner until the desired effect is achieved. in correspondence with the rust stains, in addition to the color, rust color pigment has been mixed. The car-body yellowing is always obtained with rust pigment applied with a make-up sponge.

Models weathering is not yet finished and will continue in the coming days. We will work on the passenger convoys carriages and locomotives..