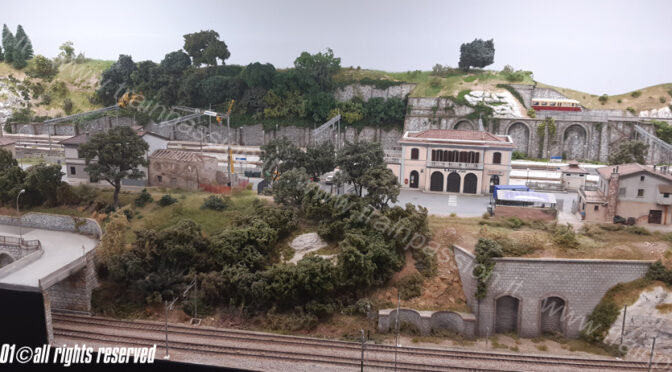 The current track dimensions are 6 meters in length and 2.5 meters in width at the widest part. The drawing is only an example and not to exact scale; having irredeemably lost the winrail file, we rebuilt it in CAD.

In the first drawing the black lines graphically depict the station plan, the single-track exit on the right that connects with the helical in brown and the helical on the left. The parade line is depicted in green and is 18 cm lower than the station level.

Variations made to the original layout plan are:
1) Lo spostamento della rimessa verso la radice sinistra della stazione, 1) The displacement of the depot close to the left root of the station, also allowing the positioning of a 9.5 m turntable.

2) The creation of the first part of the upper track line (+12). Starting from the right station side, it overtakes the station turnouts after a semi-helical and runs the entire length of the layout. On the other side, always from track 1, the line rises slightly until it is parallel to the first (depicted in blue). This false double track line will possibly continue in the future, maybe with a double track line, a transit station and a return loop, nothing has been defined as yet.

3) On the right side we have added a return loop connecting the root of the new upper line, to the single track leading to the helical. There are a couple of switches between this and the first, both hidden in the tunnel.

The lower drawing depicts the hidden part of the layout (-38), with the connection line between the parade line and the ghost station. The latter can accommodate 6 trains with 8 long carriages. The changes made to the original plan are:

1) Creation of 3 dead end tracks and a return loop(-38) inside the right helical, both connected to the siding between the hidden station and the helical itself.

2) Positioning of 4 turnouts on the left side of the ghost station.

3) Creation of two further tracks for the ghost station.