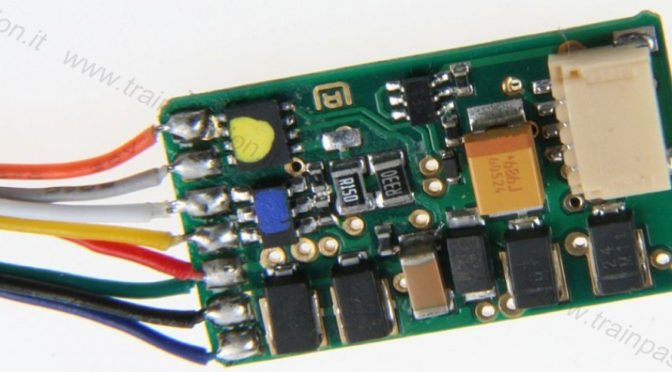 The choice of a digital system for the layout basically depends on the railway operation to be carried out.
The simplest modality is the run on sight, with manual maneuvers. For this purpouse, commercial systems composed of command station and throttle may be sufficient. However, we have more ambitious goals. Our layout will operate in a full automatic way, not excluding manual maneuvers.

This leads to provide all models with DCC decoders, every railway equipment with accessory decoders, to adopt a control software and purchase a good command station. After studies and consultation, our choice fell on a Uhlenbrock Intellibox command station for the following reasons:
1) main control software full compatibility
2) easy # CVs reading and writing
3) Integrated Loconet bus

The Loconet Bus is our choice milestone. An automatic digital operation needs trains tracking on time. In our opinion it is the most reliable and easiest to install. Inheriting the Ethernet architecture, detection points can be connected as a normal home data network by means of standard RJ11 6P cables.
Unlike other systems imposing a continuous devices polling, Loconet Bus only sends actual state changing of the controlled track sections (occupied / unoccupied) to the command station, a more correct and efficient way to engage system resources, as well as less “verbose”. Indeed data packets are transmitted when physically possible (free line) or queued for a subsequent transmission; obviously we are talking about milliseconds.

Our system optimisation is assured by the interface between the control software (see below) and our command station as buffer for data packets from the PC to the command station itself, so that no one will be lost. The PC is connected to the buffer via USB, on one of the available COM ports.

For layout blocks control we opted for the Loconet feedback modules by DCCworld. Thanks to their creator and designer Nuccio Raneri’s avalaibility for installation and settings suggestions.
As can be seen from the image, the connection is quite simple. Two RJ11 6P connectors to be connected in cascade to the Loconet Bus and a terminal block with 5 contacts, one of which to be connected to one DCC wire and the others to the controlled blocks rail.

For trains, accessory or anything else to be controlled via software we are currently equipped with:
1) DCC Aka Models controllers for turnouts, level crossing and turntable
2) Almrose DCC accessory decoders for signals and lighting
3) Uhlenbrock, Esu, Lenz DCC decoder for train engines
3) Almrose Multifunction Decoder for wagons and carriages (back lights)
4) DCC Almrose boards for carriages lighting

All turnouts are servo operating.

The system is PC (I3 with 8 GB ram) controlled on which the TrainController Gold 7 software is installed.
We thus drew a virtual synoptic for real time blocks occupancy and DCC accessory status detection and operate.
Trains are subject to predefined routes(they can be created indefinitely) scheduled in a timetable. Too long to expose here the programming steps and details , so do not hesitate to contact us at our email references or via the contact form in this web site.

In addition to the system, 4 Logitech webcams are placed in the hidden layout parts.

Our TPSoundSystem software provides the layout with the typical railway noises, such as whistles, horns, braking, announcements. The software can record sound files and announcements (The announcements can be recorded in various languages using the TTS synthetic voices available) to be played back by speakers distributed along the layout tracks. For instance TrainController invokes sound files when a train passes by, or before it enters the station. The effect is remarkable; for braking, the sound actually flows in the direction of the train.

The sounds invoked by TrainController are currently streamed to 3 distinct pairs of speakers located in the layout on the local network, even simultaneously. We can thus reproduce different sounds in different points of the layout at the same time. Additional cards can be added.

We created a panel to be installed just below the cockpit on wich we have installed 3 Arylic boards and related amplifiers. Terminal blocks assure the connection of the amplifiers to the speakers.

The speakers (8 Ohm, 2 Watt), recovered from disused monitors, are fixed under the layout board or inside the galleries.

The system assures more than an hour of trains running, during which the 14 convoys alternate on the layout, carrying out more than one route each. A day / night effect is being studied.